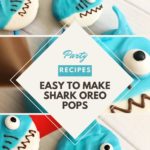 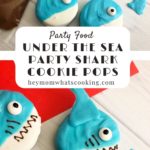 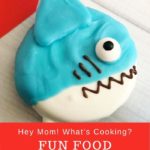 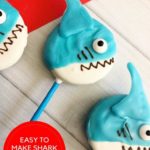 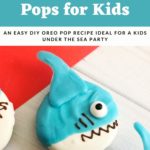 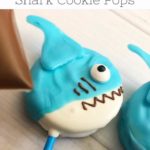 We’ve just held a fantastic under the sea themed party for our kids and they have loved some of the simple party treats that we have made. These Shark Oreo Pops were great fun to create for them and they really loved how cute they looked. So here you go our simple Shark Oreo Pops for an Under the Sea Party theme for kids.

Why my youngest said she wanted an under the sea party after her princess party last year I kind of thought she meant mermaid. But, no she wanted sharks, fish and turtles real under the sea creatures and fun.

These sharks cookie pops took a little time to set between colours but they were ever so simple to make.

How to attach a cake pop stick to your oreo!

One of the questions the other moms asked me when their kids were eating the cookie pops was how I had managed to attach the cake pop stick to the Oreo. They had all tried in the past and discovered that as soon as you put in the stick it cracks the Oreo cookies.

Well let me tell you the secret to doing it as once you know you will go OHHHH that’s how you do it.

First your going to separate the Oreo halves, so twist and split.

Then with the side with the cream you want to place a little candy melt or ted chocolate in the bottom centre.

Now take your cake pop stick and place right in the centre, add some more of either the candy melt or chocolate on top and put the top back on the Oreo.

It’s really that simple! Now just let it set before you decorate so as your moving the cake pop around you don’t split it again.

Did you make this recipe?

Why not tag Hey Mom What's Cooking so we can see what you've made!

Don’t put the Oreo’s away just yet how about making these as well!

We love to hear "Hey Mom! What's Cooking?" from the kids followed "Yummy!" So we're sharing the recipes that they and we love here for you and your family to enjoy too! Click here to find out more about us!

As an Amazon Associate, I earn from qualifying purchases.